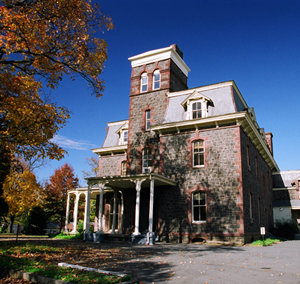 Paxton, also called Carheim, was constructed in about 1872 for Charles Paxton and his wife Rachel. Designed by New York architect Henry Dudley, the 32-room Second Empire building was listed on the National Register of Historic Places in 1979 for its architectural and local significance.

Charles Paxton died in 1889. His wife continued to use Carlheim until her death in 1921. Mrs. Paxton’s will stipulated that the house and property be used as a home for children in remembrance of her daughter, Margaret. Over the years it has served that purpose as a home for convalescing children, an orphanage, and a daycare center.

After sitting vacant for several years, the mansion and sixteen acres have been leased to The Arc of Loudoun, a nonprofit organization serving citizens with diverse special needs.  Now known as the Margaret Paxton Memorial Learning and Resource Campus, the estate will serve as a learning center, most notably for the Aurora School.  Through programs licensed by the Virginia Department of Education, the school now serves students (2-22 years old) with the disabilities of autism, developmental delay, intellectual disabilities, multiple disabilities, speech language impairments, and traumatic brain injury.

The mansion will serve as the focal point of the campus, housing administrative offices and facilities for conferences and support groups for parents and professionals.  Much of the original grandeur of this Second Empire mansion remains today.  Original wood work of oak and mahogany grace the wide staircase, library, parlors and dining room.  Carved marble mantles remain intact.  The tower room offers an impressive view of the surrounding area – thought to be the highest point in Leesburg.

However, much needs to be done to the home to meet modern requirements and current building codes for its intended use.  Based on an architectural and engineering assessment, plans include a geothermal heating/cooling system, new plumbing and wiring, a modern fire suppressant system, and an elevator.

Although Carlheim is an architecturally and historically significant building, it is not being restored as a house museum.  Carlheim will be renovated to serve a growing need in Loudoun County and honor the intent of Mrs. Paxton’s will by continuing to serve children with special needs.

Loudoun Preservation Society, a 501 (c) (3) nonprofit organization, is helping The Arc of Loudoun raise funds for this desperately needed facility.  Download the brochure (Page 1 and Page 2) for more information or mail a contribution to: